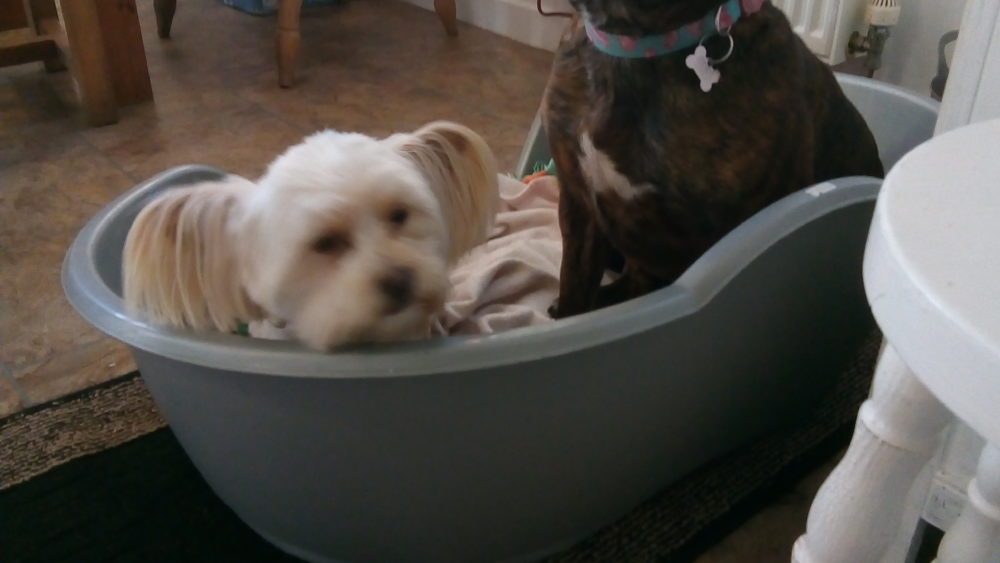 It’s been a barking month…we’ve been so busy in the garden, litterpicking and causing the usual canine chaos.

I (Lili-Mcvitie) have been mostly rubbing my head and body in chicken poo (with 9 rescue chickens, it would be rude not to!)  Humans will know it’s a very sticky and smelly substance which is virtually impossible to get out the bottom of your shoes but think of it on my very think fur.  It was an emergency appointment with Wild Heart Dog Grooming who kindly found me an evening appointment.  What a transformation! Apparently I loved having my photo taken there plus the miserable teens say I don’t smell of digestive biscuits any more hence my name… Lili-Mcvitie!

Lola-Magnolia has been busy out and about litterpicking with Llanberis Tidy Village group, running about in the garden, helping with the planting of funny green plants called ‘ Bears Breeches’ and teaching the small human to count with Pero pet food training treats.  The small human counts the little bone shaped biscuits and Lola eats them.

We’ve now added another tablet to our canine CV…’Sofa Snuggle Buddies’ this may be our most important job so far as the small human caught chicken pox, so it was essential to sit each side on the sofa, snuggle up and watch cartoons.

Human has had to close the cat flap on the garage door to stop the chickens getting in and eating all the cat’s Pero biscuits.  Not bring biased… but Pero biscuits have made their feather more shiny, those rubber gloves on their heads redder and they don’t seem to loose their feathers as much…maybe that’s why I looooooove rubbing myself in their poo …it’s Pero powered!!!